The Waldensian Festival held annually in August, began as the "Festival of the Glorious Return" to commemorate one of the most important dates in Waldensian history. In the late 17th century King Louis XIV of France, attempted to destroy the Waldensian people. At his command, thousands were killed and those who survived were thrown into prison. After other European protestants protested against the persecution, those men who survived prison were released and forced into exile in Geneva, Switzerland.

They were commanded to leave their valleys, and traverse the bitter cold Alps during the dead of winter. Many deaths occurred during the journey, but when the survivors reached Geneva, they were treated with generous hospitality. But they were still determined to return to their homeland. In August 1689, led by Henry Arnaud, 800 men fought their way back through a French force of 2,500. Because of the unconquerable spirit which led them home, the celebration of the glorious return of the Waldenses to their valleys has been celebrated each August for more than 300 years. For many years a community picnic and worship service on August 15th commemorated the date in Valdese. In 1976, the first festival of the Glorious Return was held in Valdese on the second Saturday in August.

The event is presented by the Town of Valdese each year to commemorate the heroic Waldensian people who founded Valdese in 1893. Honoring the Town's unique heritage with a variety of events that fills the quaint downtown with over 15,000 visitors and residents during the 2 day festival celebration. The Friday night kickoff features live music, classic car show, amusement rides and a special presentation of the outdoor drama "From This Day Forward". The weekend continues on Saturday when Main Street is lined with over 170 food/art/craft vendors, amusement rides, bocce tournament, church service, traditional Waldensian meal, open art competition, attraction tours, street dances and live music throughout the day. The Valdese community looks forward to sharing the celebration with you!

Thank you to our event sponsors!

NO OUTSIDE COOLERS & ALCOHOLIC BEVERAGES OR PETS PERMITTED AT THIS EVENT. Thank you for helping us keep the Waldensian Festival safe and enjoyable for everyone! 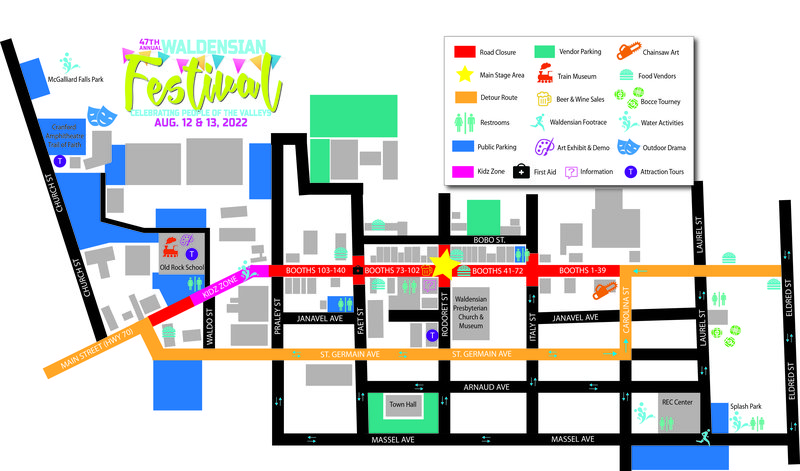